HPE Aruba has invested heavily in network as a service. But some customers — especially schools — do not see much benefit in the subscription-based model for delivering hardware and software. At the Atmosphere user conference this week, Aruba chief product and technology officer David Hughes identified network as […]

HPE Aruba has invested heavily in network as a service. But some customers — especially schools — do not see much benefit in the subscription-based model for delivering hardware and software.

At the Atmosphere user conference this week, Aruba chief product and technology officer David Hughes identified network as a service (NaaS) as Aruba’s most crucial networking trend in 2022. The company kickstarted its NaaS investment with the announcement last week of eight popular networking products offered as a service through HPE Greenlake. The as-a-service offering lets organizations deploy infrastructure on-premises and pay for it via a consumption-based model.

In general, companies benefit from NaaS by turning over product maintenance to the vendor and switching from Capex to Opex, which has no or low upfront costs and let companies spread expenses over a contracted period.

Aruba targets retail and schools for NaaS, said Ulf Vinneras, Aruba’s vice president of service product management. Also, NaaS could appeal to companies in the middle of acquisitions or mergers, a time when networking services are needed quickly, but the IT teams to deliver them may not exist.

Interviews with Aruba customers found that some organizations — especially schools — did not see NaaS as aligning well with their business operations.

“Most of the schools that we work with use the federal E-Rate program to buy their equipment, and they buy it as a capital expense,” said Ryan Rothkopf, CEO of Provision Data Solutions. Provision, based in Chesterfield, Mo., installs network infrastructure at schools.

“In my experience with K-12, they like to buy the equipment, own the equipment, because they never know when their budgets are going to change … they don’t like to get tied into these contracts too much,” Rothkopf said.

Others agreed that NaaS is not always the best accounting option.

“I just don’t think it’s a model for everybody. It’s there, it’s open and people can use it, but there are lots of ways to have control of your yearly expenditures and flatten your expense line,” said Emanuel Green, solutions specialist at Compugen, an Israeli drugmaker.

Aruba offers two tiers of NaaS – one managed by the customer and the other by Aruba or a partner. Jeffrey Lawrence, a network engineer at Houston-based Insperity, said managing infrastructure in-house was critical to the outsourcer of human resource services.

“When it comes to networking as a service … particularly what I like about Aruba is they still have local administration,” he said.

Some Aruba channel partners believe they can sell Aruba NaaS to customers.

“As companies have gone to the cloud, they’ve gotten used to the idea of pulling out a credit card or doing something on an operational cost basis,” said Michael St. Amour, a technical architect at New York-based Saturn Business Systems, a computer support company. “[Hardware and software] tied together into a monthly bill, with that as-a-service type concept, is one of the big things that we’re seeing a lot more interest in.”

Other partners are less enthusiastic.

“We’re in the Northwest, and we tend to move a little slower in some of the states we work with,” said Darrin Good, director of business development at school IT services supplier CompuNet, based in St. Louis Park, Minn. “I think some of [our customers] would be just as happy not moving [to NaaS] because they’re not adopting the cloud at a rapid scale, but I think they have to — I think it’s the way of the world, and it’s the way the technology is being consumed.”

Aruba execs said they don’t plan to force customers to adopt an as-a-service networking model. Nevertheless, the company will eventually offer all its products as a service, said HPE CEO Antonio Neri.

Madelaine Millar is a news writer covering network technology at TechTarget. She has previously written about science and technology for MIT’s Lincoln Laboratory and the Khoury College of Computer Science, as well as covering community news for Boston Globe Media.

Sun Apr 3 , 2022
Thanks to a grant from the Governor’s Office of Highway Safety the Wrens Police Department has mounted 11 laptop computers and printers in its patrol vehicles.  “It was something the department was working on before I got here, but I jumped on it immediately because I know the benefits of […] 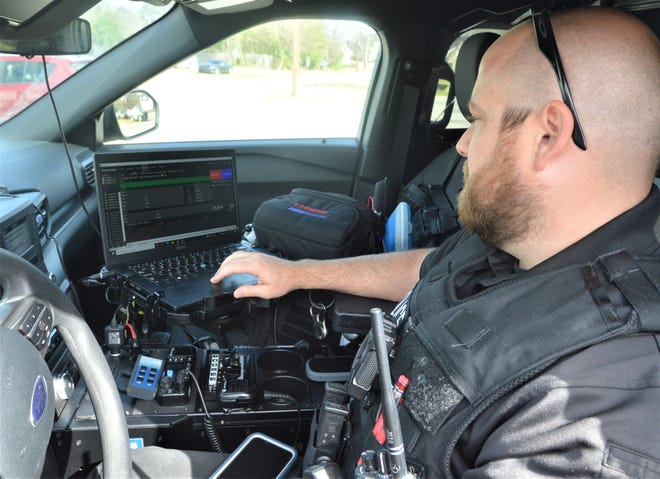