The COVID-19 pandemic has been a boon for the tech sector, creating a shortfall of skilled workers in Edmonton, industry watchers say. Companies had to adapt to working remotely, said Allie Knull, CEO of ResumeFree, a company that matches candidates with employers. “Two years of transformation happened in two months and […]

The COVID-19 pandemic has been a boon for the tech sector, creating a shortfall of skilled workers in Edmonton, industry watchers say.

Companies had to adapt to working remotely, said Allie Knull, CEO of ResumeFree, a company that matches candidates with employers.

According to CBRE, an international commercial real estate and investment firm, Edmonton has been North America’s fastest-growing tech market over the past five years.

But its 2021 Scoring Tech Talent Rankings identified a shortfall of workers with the necessary technology background.

According to the report, between 2015 and 2019, 5,522 students in Edmonton graduated with a technology degree but during that time, the labour market added about 12,000 tech jobs.

Stephanie Remniak, program chair of NAIT’S computer network administrator program, says companies are reaching out to her for graduates to fill vacancies much earlier than usual.

“I’ve never had this many requests, especially at the beginning of a school year,” Remniak said.

Companies and organizations typically begin looking for graduates in February and March, she said.

Her staff, including herself, are also being headhunted, she said.

Fortunately, the pandemic has encouraged people to rethink their career choices, she said, with students entering the tech sector from other industries.

“They were either in oil or gas or they were in the automotive sector, and they switched over to take our IT program,” she said.

Lighthouse Labs, an online provider of technology skills and training, believes it can help fill the gap by training workers in a shorter period than more traditional school settings.

Jeremy Shaki, CEO of the Vancouver-based company, believes nearly anyone can learn to code in just three weeks.

Its 21-day coding challenge offers people of all backgrounds a chance to learn basic coding skills, he said.

“We noticed a lot of people would like to get into this kind of stuff, but actually are intimidated,” Shaki said on CBC’s Edmonton AM.

People often believe that you have to be a computer nerd or be exceptionally academic to be able to learn to code, he said.

Edmonton AM6:46Why there are more tech jobs than talent in Edmonton

Tech education company Lighthouse Labs recently created a 21 day coding challenge after recognizing there is not enough tech talent to fill jobs across Canada, and particularly in Edmonton. 6:46

“We’re hoping to help more Canadians lose a little bit of that intimidation and do something fun for a few days,” Saki said.

The challenge requires novice coders to complete 15- to 30-minute tasks a day either individually or as part of a team, with prizes offered as incentives.

Although the coding challenge would not help with jobs right away, Shaki said, it will help enough people get acquainted with the basics in order to consider a career in tech.

Mini IT8 to Celebrate Thanksgiving

Mon Nov 22 , 2021
GEEKOM’s latest mini PC was developed in direct response to the growing popularity of modular PCs, which empower users to customize and expand the memory, storage and other elements to their exact needs. The Mini IT8 is ideal for heavy PC users, office workers and families alike with its lightweight […] 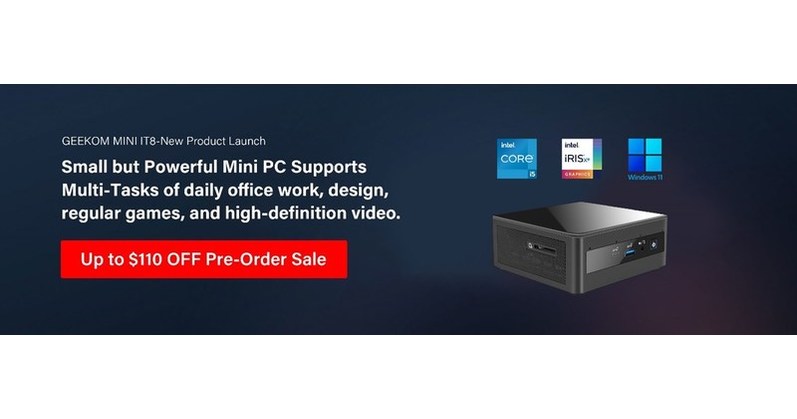