Recent sell-offs have taken some of the air out of the sector, but many cybersecurity stocks have turned in a solid 2021 as client companies upped spending to fend off fast-evolving online threats. The coronavirus emergency expanded the cybersecurity battleground as companies shifted to remote work, opening up new targets for hackers.

“The concept of ransomware is not new. It just continues to get worse and worse,” Mike Sentonas, chief technology officer at cybersecurity specialist CrowdStrike Holdings (CRWD), told Investor’s Business Daily. “They’ve changed the way they target victims. Ten years ago, if you got hit by ransomware it was on a personal machine. Maybe your photos and files were encrypted and for a few hundred dollars away they went.”

He added: “Now we see criminal groups targeting large businesses, governments and there are examples of ransomware demands of well over $10 million. They’re becoming much more brazen because a lot of money is being made. And there’s a huge ecosystem now. You’ve got criminal groups that build a platform, rent it out and take a percentage of the profits.”

Meanwhile, the IBD computer security group advanced 35% at one point this year. It’s now up about 20% amid a broad correction in software growth stocks as more investors shun lofty valuations. Some cybersecurity stocks now trade below their 50-day moving averages after selling off on earnings reports. The IBD computer security group now ranks No. 17 out of 197 industry groups tracked.

Companies like Fortinet (FTNT) and Palo Alto Networks (PANW) have withstood a rash of recent selling in the sector and their stocks remain solid. Others, like CrowdStrike, Zscaler (ZS) and Cloudflare (NET) — the latter of which is part of a different sector but also plays in the cybersecurity space — have stumbled.

Fortinet, Palo Alto Networks and Zscaler were added to the Nasdaq 100 starting Dec. 20.

The industry outlook, though, remains favorable. As in the case of the coronavirus pandemic, there’s a long game in the ransomware battle.

Cyber extortionists pulled in $422 million in cryptocurrency payments in 2020, up some 344% from a year earlier, says Chainalysis. The group provides cryptocurrency market intelligence to government agencies, financial institutions and crypto businesses.

In ransomware attacks, hackers seize control of an organization’s computer system and data by installing malware. They lock up a victim’s computers with data-encrypting software. One ransomware variant threatens to release confidential data to the public.

In a growing number of incidents there’s “double extortion.” That’s when cybercriminals demand payment to de-encrypt an organization’s data and they also threaten to release data on the internet.

Ransomware-as-a-service enables less computer-savvy cybercriminals to engage in attacks without developing their own malware. They obtain malware and extortion tools via the dark web from criminal gangs. The names include DarkSide, REvil, Sodinokibi and Black Matter. These gangs take a share of ransomware payments.

The U.S. government aims to crack down on digital cryptocurrencies that make it easier for ransomware hackers to collect payment over the internet anonymously. The Treasury Department recently placed sanctions on Russia-based Suex, a crypto over-the-counter broker, for making ransomware transactions. 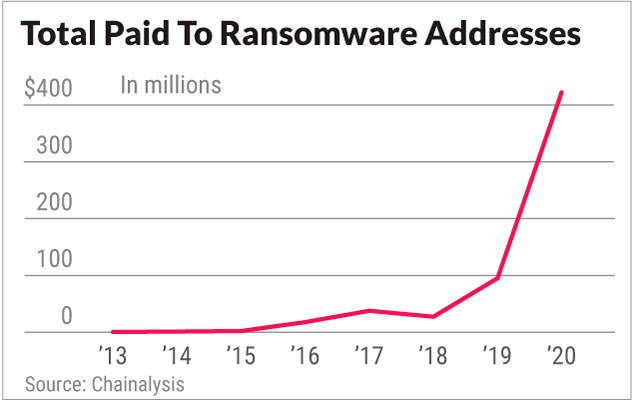 The ransomware threat has become so severe that the U.S. military in early December acknowledged that it has taken actions against criminal cyber groups. Previously, the U.S. government had viewed ransomware attacks as a problem for law enforcement.

The ransomware battle presents a host of challenges for cybersecurity stocks as well as small businesses, large corporations, hospitals, colleges, government and others.

Some ransomware attacks do not encrypt data. Instead, they aim to disrupt business operations by taking over computer networks. The threat is growing in manufacturing and industrial control systems. One example: the attack on Colonial Pipeline in early May. The hack took down the largest fuel pipeline in the U.S. and led to shortages across the East Coast.

Cybersecurity Stocks: Do Criminals Have Edge?

Many companies are more aware of the ransomware threat than a year ago. And, they’re focused on vulnerabilities such as phishing emails, poorly secured remote access log-ins, or software updates. But ransomware victims are sometimes harmed by things out of their control, like flaws in Microsoft (MSFT) software or vulnerabilities in their supply chain.

“Right now the game is very disproportionate on the attacker side when it comes to ransomware. Many of these attackers and operators can do their work without much risk and without repercussions,” said Wendi Whitmore, senior vice president of cyber consulting and threat intelligence at Palo Alto Networks.

“Ransomware-as-a-service has enabled more and more people to effectively get in the game,” Whitmore told IBD. “Ransomware-as-a-service has operated as a global business in some cases but more recently almost like retail franchises, where the operators provide all the tools to aspiring criminals. They recruit affiliates through websites available on the dark web. They market their capabilities very similar to traditional consumer businesses.”

According to Palo Alto’s Unit 42 threat intelligence and analytics arm, a fast-growing number of incidents involve ransomware demands over $1 million.

Palo Alto Networks, CrowdStrike and Mandiant (MNDT) are taking part in the Joint Cyber Defense Collaborative, or JCDC, set up by the Biden administration in August to improve cybersecurity. Mandiant was formerly known as FireEye. 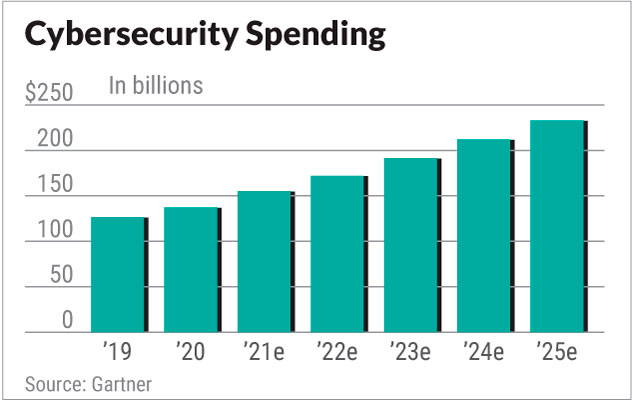 When the White House hosted a cybersecurity summit in August, technology and financial industry giants pledged to help in the fight against ransomware attacks. Also invited to the summit were four cyber insurance companies. The hope was that their industry could also play a big role in setting higher security standards.

Taking part in the summit were cyber insurance startups Coalition and Resilience as well as established carriers Vantage Group and Travelers (TRV). Coalition in late September closed a $205 million funding round at a valuation of more than $3.5 billion. Its security partners include Okta (OKTA) and SentinelOne (S).

Cyber insurers have been hard hit by the ransomware explosion. Ransomware accounted for 75% of all cyber losses in 2020, according to an AM Best report.

The $5.5 billion global cyber insurance market remains small compared with autos and property. Less than 15% of organizations globally buy cyber insurance. That includes about one-third of all large companies in the U.S., said the Ransomware Task Force report.

To get better actuarial estimates on computer security risk, seven top insurance companies in June formed CyberAcuView. It will combine their data collection activities and analysis.

One view is that ransomware hackers target businesses that they believe or know have coverage. That way it’s easier to pay up.

“The bad guys are figuring out how to make money and ransomware has been a very effective way to do that,” said Brian Beyer, chief executive and co-founder of cybersecurity firm Red Canary. “There’s a relatively new cybersecurity insurance industry. Now that we’re a couple of years into it, you have a lot of those insurance companies asking questions of whether they can keep underwriting ransomware losses.”

Here’s Where To Find Cybersecurity Stocks To Buy And Watch

Cyber insurance premiums rose 20% in 2020, according to an Aon report. Premiums jumped in early 2021 as ransomware attacks revved up.

“It’s getting a lot harder to get cyber insurance and it’s getting more rigid in terms of the policies,” said CrowdStrike’s Sentonas. “We’re starting to see insurance companies mandating certain security technologies and standards. If companies don’t have the right types of security they’re probably not going to get insurance.”

The coronavirus emergency and shift to remote work have impacted spending on cybersecurity, said an RBC Capital report in November.

“While megatrends such as cloud adoption and digital transformation are well-established, we believe Covid has accelerated this transition by up to five years or potentially more,” said RBC analyst Matthew Hedberg. “Covid pushed the network perimeter far beyond the traditional hub-and-spoke design of an on-premise data center.” 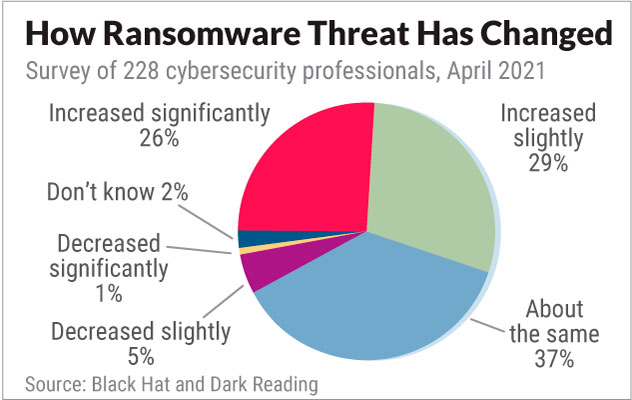 The cybersecurity stocks expected to have a bigger role in deterring ransomware include those that specialize in multifactor authentication, a concept known as Zero Trust, vulnerability management and endpoint detection.

Once verified, users receive access only to specific apps and data aligned with their jobs, not entire networks. Companies call the security process segmentation. It’s important because ransomware spreads across a network through data file paths to which an infected user has access.

CrowdStrike acquired Humio, a cloud log management and observability startup, to beef up its XDR offerings. Fortinet, Rapid7 (RPD) and Mandiant also have made XDR-related acquisitions.

The New America: The Place To Find New Stock Ideas

Many cybersecurity startups such as Cybereason, Illumio, Exabeam and Recorded Future do business in the XDR market. Amid the spike in ransomware incidents, venture capital has also been flowing. Recipients include Netskope, Menlo Security, Deep Instinct and Lacework.

Cybersecurity stocks aren’t the only plays for investors eyeing the extortion economy. There’s also the growing market for data backup and recovery.

Anti-virus software maker Emsisoft says in 2020 it took 287 days on average for a business to fully recover from a ransomware attack. 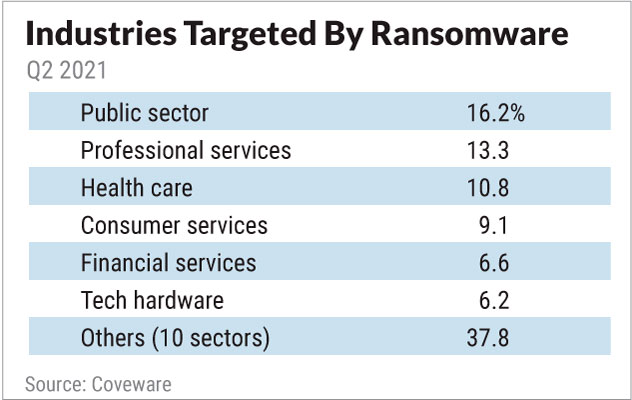 Some cybersecurity stocks prioritize data backup and recovery, aiming to have the ability to just say no to ransomware demands. But ransomware hackers target data backup systems as well.

“The best cure for ransomware is not getting it in the first place,” said Gartner analyst Nik Simpson. “Protecting the backup data systems has become a key part of any ransomware strategy.”

How This IBD Tool Simplifies The Search For Top Stocks

Find Compelling Growth Stocks With IBD’s Stock Of The Day

Get A Free Trial Of IBD Leaderboard

Why Cybersecurity Stocks Could See More Upside From Ransomware Attacks

Are Investors Undervaluing These Computer and Technology Stocks Right Now?

Mon Dec 13 , 2021
While the proven Zacks Rank places an emphasis on earnings estimates and estimate revisions to find strong stocks, we also know that investors tend to develop their own individual strategies. With this in mind, we are always looking at value, growth, and momentum trends to discover great companies. Of these, […]