With gambling deals on the wane, cryptocurrency companies are the latest wave of controversial cash to flood into football, with many top European clubs having deals with companies in the sector.  The latest and perhaps most significant yet may be Liverpool who, at the same time as attempting to win […]

With gambling deals on the wane, cryptocurrency companies are the latest wave of controversial cash to flood into football, with many top European clubs having deals with companies in the sector.

The latest and perhaps most significant yet may be Liverpool who, at the same time as attempting to win a quadruple on the field, are in talks off it with a number of companies from different areas, including cryptocurrency firms, to replace Standard Chartered on the front of the iconic red shirts next year — as revealed by David Ornstein.

Were they to strike a deal they would be the first Premier League club to have a cryptocurrency firm as their front of shirt sponsor.

Here The Athletic explains what cryptocurrencies are, the deals firms have already signed with clubs and whether there should be any concerns about partnering with them.

What are cryptocurrencies and who is in the mix for Liverpool’s shirt sponsorship deal?

Cryptocurrencies are digital assets based on blockchain technology, the computer networks which underpin the likes of Bitcoin and Ethereum.

The firms in the race for Liverpool’s shirt include a crypto exchange firm — a platform to buy and sell digital currency — and a blockchain platform, a decentralised computer network that underpins cryptocurrencies.

These sorts of firms are increasing their presence in sport but are controversial for reasons including the environmental impact of their products and an association with volatile financial speculation.

Which other major crypto sponsorship deals have there been in sport?

This “fan engagement” company creates cryptocurrency tokens that grant access to polls and rewards, but an investigation by The Athletic revealed the company’s products are subject to frantic “pumping” and “dumping” by people who see the volatile tokens as financial investments.

In the USA, big-money crypto sponsors are even more established. Crypto.com recently signed a massive 20-year, $700 million sponsorship deal with the Los Angeles arena, previously known as the Staples Centre, home to multiple sports teams including the LA Lakers and LA Clippers of the NBA.

The firm also has deals with Formula 1 and UFC (the Ultimate Fighting Championship).

FTX, another big exchange, has a deal with Major League Baseball, and has given its name to Miami Heat’s basketball arena in Florida.

There are many more cryptocurrency firms in different sports around the world appearing on jerseys and renaming stadiums.

Why is a crypto sponsor controversial?

This is particularly true for the original Bitcoin blockchain. Later versions — such as the Tezos blockchain which sponsors Manchester United’s training kit, and the Polygon blockchain which underpin Liverpool’s collection of NFTs (non-fungible tokens) — say they are more environmentally friendly.

Second, and more fundamentally, critics argue that cryptocurrencies have no real purpose beyond financial speculation. The word “cryptocurrency” is a bit of misnomer because few people use this technology for buying goods or services. Far more common is using them as digital assets to try to make money. But unlike conventional assets like company stocks or commodities like gold or oil, cryptocurrencies are not linked to any tangible entity.

This means some go so far as likening the entire industry to a Ponzi scheme, where cash is transferred from late investors to early investors, who make money simply by buying low and selling high, with no product of tangible value being generated at any point.

Many cryptocurrencies, most famously Bitcoin, have ballooned in value since their creation, making some people very rich. But over the past year or two as the industry has become more established, these sorts of gains have become harder to come by and lots of people have lost money.

Another concern about cryptocurrency exchanges is that being such a new form of technology, the laws and regulations don’t always apply to them.

Furthermore, some cryptocurrency exchanges offer many products, some of which, though legal in the exchange’s home country are illegal in the country where the product is being marketed.

For example, during Liverpool’s recent thrilling draw with Manchester City, OKX, a cryptocurrency exchange, was prominently advertised at the Etihad Stadium.

A look at this company’s website shows that the company deals heavily in crypto derivatives, which are banned from sale to UK consumers because they are deemed too risky for retail investors. There is no suggestion club or company is breaking UK law and the company itself is free to advertise here.

The financial structures of some of these companies are poorly understood, meaning we don’t know if they are borrowing huge sums to fund these sports sponsorships, with the road to future profitability less clear. 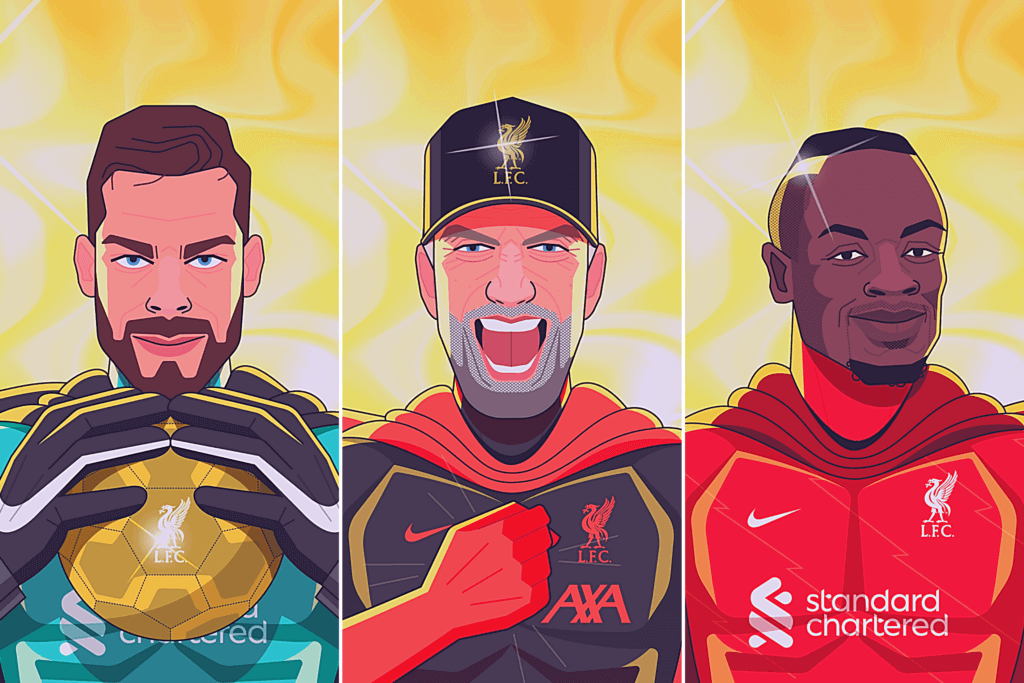 What are the upsides?

Put simply, there is lots of money in this. The cryptocurrency industry is booming around the world and the sums being funnelled into sport are vast.

Maintaining a football club at the very top tier of international competition is increasingly expensive, with wages endlessly on the rise, and no cost controls like in American sports — which implement salary caps.

While some clubs enjoy the luxury of financing from a state-linked entity, or, until recently, an oligarch willing to stomach huge personal losses for sporting glory, Liverpool are not in that position and Fenway Sports Group try to operate in a fairly sustainable way.

The club’s achievements have been exceptional over the past few years, but it will be difficult to sustain those levels without going toe-to-toe with rivals financially.

Cryptocurrency advocates also claim there are lots of positives about the technology itself, such as enabling payments across borders and across jurisdictions, such as in warzones or countries with poor banking systems.

Do Liverpool have any history with crypto?

The club recently launched a collection of NFTs, a sort of digital asset based on blockchain technology in the form of cartoon images of Liverpool players, which can be traded online.

The club also has a sponsorship deal with Think Markets, a trading app which offers cryptocurrency trading as a product.

What are the risks of a cryptocurrency deal?

Given the sector is growing so quickly despite almost no regulation, perhaps the biggest risk — aside from a gigantic crypto crash that causes investors to desert the sector — is not something that is obvious right now.

These firms are involved in moving money around the globe in ways that is barely understood, let alone regulated, meaning cryptocurrency exchanges are constantly working to steer on the right side of the law and not fall foul of prohibitions on money laundering or being used to fund illegal activities.

The biggest risk is that a club will sign a deal with a company that one day explodes spectacularly, or is embroiled in scandal and controversy in a way that is perhaps barely even conceivable at the moment the deal is signed, while the cryptocurrency hype is raging and while the values of digital assets are generally going up.

Although partnering with one of these controversial companies may be the best way for a club like Liverpool to help bankroll footballing glory, before they swap Standard Chartered for a new logo, they may want to make sure they are getting paid for the privilege in dollars or pounds, not crypto.

Tue Apr 26 , 2022
Reporter: WEI Qian As we all know, the development of a country and society is inseparable from the progress of the software industry. In recent years, batches of cutting-edge talents have emerged in the field of software technology R&D. They play their advantages and specialties in their own industries and fields and […]