The 18-year-old allegedly lunged at police with an “edged weapon.” December 4, 2021, 11:18 PM • 5 min read Share to FacebookShare to TwitterEmail this article A Florida Institute of Technology student who was reportedly wielding a knife at students on campus was fatally shot by officers Friday night, authorities […]

The 18-year-old allegedly lunged at police with an “edged weapon.”

A Florida Institute of Technology student who was reportedly wielding a knife at students on campus was fatally shot by officers Friday night, authorities said.

Police officers and school security responded shortly before 11 p.m. to reports of a man on the Melbourne campus “armed with a knife and assaulting students,” the Melbourne Police Department said.

The incident began at Roberts Hall, a freshman residence hall, according to school officials.

Officers confronted the man, identified by police as 18-year-old Alhaji Sow, in a campus building “armed with an edged weapon,” the department said.

Sow “lunged” at a police officer with his weapon during the confrontation, and the officer and a school security officer both fired their weapons, striking him, according to Melbourne police.

Officers attempted lifesaving measures but the student died at the scene, police said.

The Melbourne police officer who fired his weapon was injured during the incident, police said. No other injuries were reported.

Shortly after midnight, the school issued a shelter-in-place alert and advised people to avoid the area due to police activity on campus. The order was lifted around 3 a.m., though students were advised to avoid Roberts Hall and Campbell Hall, another residence hall, due to the investigation.

The shooting was an “isolated incident” and there is no further threat to the campus, police and school officials said.

The Florida Department of Law Enforcement is investigating the shooting. The officer is a five-year veteran of the force, police said.

Sow, of Riverdale, Georgia, was a sophomore at the university studying aeronautical science, school officials said.

The school said it is arranging support services Saturday for students and others in the community.

“My heart goes out to everyone in pain. I mourn any loss of life, while I also remain steadfastly thankful for the men and women who invest their lives in protecting us,” Florida Tech President and CEO T. Dwayne McCay said in a statement Saturday. “The safest university campuses are the ones where students, staff, faculty and others look out for one another. We do that at Florida Tech.”

Sun Dec 12 , 2021
The new 163,000-square-foot Leinweber Computer Science and Information Building on North Campus will, for the first time, bring together under one roof the School of Information and the College of Engineering’s Computer Science and Engineering Division. With the schematic drawing approved by the Board of Regents on Dec. 9, the […] 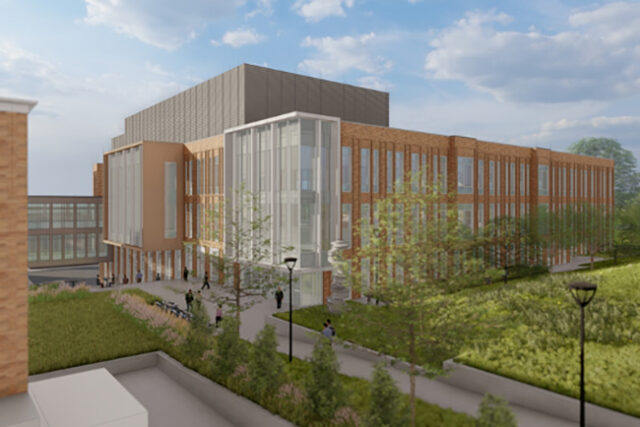