The tech industry is hiring veterans, and the benefits are substantial. Most importantly, veterans ahead of the tech curve. Plenty of the technology we take for granted today started in the military; the burgeoning drone craze is a modern example, but even the internet itself springboarded from ARPANET, a Department […]

The tech industry is hiring veterans, and the benefits are substantial.

Most importantly, veterans ahead of the tech curve. Plenty of the technology we take for granted today started in the military; the burgeoning drone craze is a modern example, but even the internet itself springboarded from ARPANET, a Department of Defense project. We may not know now what military technology will become key to civilian tech advancements, but one thing is for certain: Veterans will understand it first.

Many companies in STEM industries already understand this phenomenon, according to LinkedIn’s 2019 Veteran Opportunity Report. Among the top 50 industries, those with the highest rates of veteran hiring include defense and space, aviation, and information technology and services. Tech household names, including Google, Dell and Salesforce have implemented initiatives specifically to recruit and train veterans for tech-based careers at their companies. There are plenty of opportunities for veterans looking to get into the field.

For Mike Kyle, that meant taking on the role of Internet of Things (IoT) operations manager and software engineer at RapidDeploy. Built In Austin talked to Kyle about how his military service led to his current position. 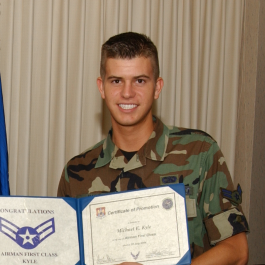 How and where did you serve your country? What is your current role, and what are you working on right now?

I served at Scott Air Force Base in Illinois supporting base telecom and fiber optic transports and Osan Air Base South Korea supporting an IP based computer network. I was a 3C2X1 — communications controller (tech control), which has since been discontinued and absorbed into other career fields.

Currently I am an IoT operations manager and software engineer for RapidDeploy. I’m currently working on cloud infrastructure that will support i3 NG9-1-1 data ingestion.

What aspects of your military service have helped you build a career in tech, and what are some new skills you’ve developed since you left the service?

Military service was a foothold into professional IT work. I built computers as a child and was fortunate to be introduced to some cool tech in the military at a young age. I was able to excel at each position rather quickly, obtaining certifications and degrees while serving. The military was half a lifetime ago, and I have since developed many more skills: Network engineering, cloud, programming, Linux, virtualization, infrastructure and system administration, among others.

I built computers as a child and was fortunate to be introduced to some cool tech in the military at a young age.”

What advice would you give to fellow veterans who are looking to build a career in the tech sector?

This would apply to anyone, not just veterans: Try a few areas first and see what piques your interest. Excitement, curiosity and passion will get a person through the hard times of wanting to quit. Also, surround yourself with people who are just a little bit better or a little bit smarter. Everyone needs a role model, and one day that might be you.

Sat Nov 13 , 2021
TEL AVIV, Israel, Nov. 11, 2021 /PRNewswire/ — Quantum Machines, creator of the Quantum Orchestration Platform, announced today that Max Schireson has joined the company’s Board of Directors. Max is most well known as the former CEO of open-source database company MongoDB, where grew the company’s sales from $1M to […]