According to researchers at Washington State University (WSU), the future of neuromorphic computer chips may lie in … honey. Scientists involved in the study claim that this technology could be paving the way for sustainable, bio-degradable, and overwhelmingly fast computing. Honey is hardly the first thing to come to mind […]

According to researchers at Washington State University (WSU), the future of neuromorphic computer chips may lie in … honey.

Scientists involved in the study claim that this technology could be paving the way for sustainable, bio-degradable, and overwhelmingly fast computing.

Honey is hardly the first thing to come to mind when you imagine a computer chip, but WSU engineers believe that it could be the key to making computing eco-friendly while also being powerful enough to mimic the workings of a human brain. This form of computing, made to simulate how the neurons in our brains work, is referred to as neuromorphic.

Although many of us may be impressed with how advanced computers are these days (let this new honey-based finding be the proof of that), our own brains are far more impressive still. That is why neuromorphic computing is sometimes thought of as the future of technology — because the human brain can still process, analyze, and adapt to what it sees in ways that a computer cannot. While computers can process tremendous amounts of data much faster than a human being could, we still retain the upper ground when it comes to approaching problems creatively.

Neuromorphic computing is meant to serve as a bridge between the human brain and technology, enabling autonomous systems that can simulate something close to human cognition. Such systems are meant to be much faster and less power-hungry than even the best PCs currently available. Now, it seems that honey could play a part in making these futuristic devices a lot more sustainable for our planet.

A memristor is capable of both processing and storing data in memory, much the way a human brain can.

The engineers at WSU were able to create a functioning memristor out of honey. A memristor is a component similar to a transistor, and it’s capable of both processing and storing data in memory, much the way a human brain can. These devices are infinitesimally small — in the case of this study, the memristor was the width of a human hair, but it needs to be made much smaller in order to serve its intended purpose in the future.

The target size will be around 1/1000 of a human hair, meaning these memristors will need to be developed on a nanoscale. This is because millions, if not billions, of memristors, are going to be used in building a full, functioning, high-performance neuromorphic computing system. As a means of comparison, the human brain has over 100 billion neurons, or, over 1,000 trillion synapses.

Feng Zhao, associate professor of Washington State University’s School of Engineering and Computer Science, was the co-author of the study alongside a graduate student, Brandon Sueoka. Zhao compared the honey-made memristor to a human neuron, stating that it has very similar functionalities while retaining a very small size.

In order to achieve the desired effect, the scientists used true honey. They processed it into a solid form which was then placed between two metal electrodes — a simulation of a human synapse. Through research, they were able to discover that the honey memristor successfully emulated the way human synapses work. This was measured by the device’s ability to quickly switch on and off at a speed similar to the human brain — between 100 and 500 nanoseconds.

It definitely seems that honey memristors could be promising in terms of performance when it comes to neuromorphic computing, but they have another obvious perk — they’re fully biodegradable. While the team has also explored using other organic materials, such as proteins and sugars, honey seems to be the winner so far.

“Honey does not spoil. It has a very low moisture concentration, so bacteria cannot survive in it. This means these computer chips will be very stable and reliable for a very long time,” said Feng Zhao. “When we want to dispose of devices using computer chips made of honey, we can easily dissolve them in water. Because of these special properties, honey is very useful for creating renewable and biodegradable neuromorphic systems.”

The team published its findings in an issue of Journal of Physics D: Applied Physics. Of course, the researchers have a long way to go before implementing this technology anywhere near something that might be used by the industry at large. However, the first crucial steps have already been made. Next time you add a spoonful of honey to your tea, consider that one day (in some distant future, mind you), you might be using a computer that runs on that very same substance.

Are Self-Driving Vehicles the Future of Restaurant Food Delivery? |

Wed Apr 13 , 2022
If you’re a restaurant owner looking to expand your business and your audience, self-driving delivery vehicles might sound like a good idea — but, is it the right solution for small businesses? By Jori Hamilton, RTN Feature Writer – 4.8.2022 Self-driving vehicles have always seemed futuristic. Even a decade ago, […] 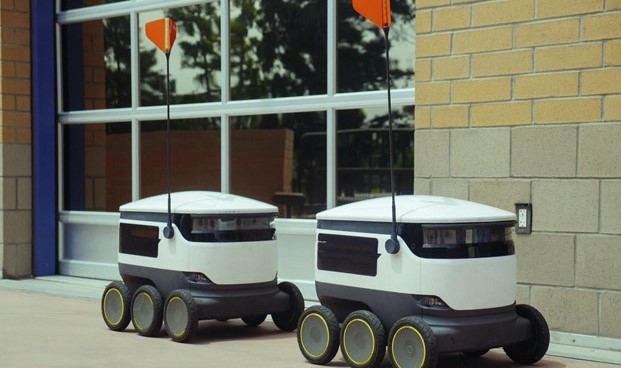