Pinterest Mail order companies such as Sears, Roebuck and Co. revolutionized goods distribution nationwide starting just before the turn of the 20th century, and revolutionized household management as well. Sears made labor and time saving items, like sewing machines, affordable, available — and a necessity. The offerings […]


Pinterest
Mail order companies such as Sears, Roebuck and Co. revolutionized goods distribution nationwide starting just before the turn of the 20th century, and revolutionized household management as well. Sears made labor and time saving items, like sewing machines, affordable, available — and a necessity. The offerings of machines by several companies, like Minnesota, Edgemere, and others, offered women many different price ranges, options and accessories that saved enough time on sewing and making clothing to make a sewing machine a wise investment. Offering everything from “medicines” to farming implements and even headstones and monuments, mail order companies transferred purchasing from the local store owner to the consumer, and often at lower prices.

While the Lake Superior copper region contributed tons of refined copper to the American Industrial Revolution, it also reaped the rewards of the same revolution. Everything from boilers to steam engines, to rock crushers to air compressors and machine drills, received experiments, trials and adoption in the region. But modern technology, as we have begun discussing, also found its way into homes. Just one example is piping water into houses and equipping the inlet pipes with faucets. Running water also introduced conveniences such as the “water-closet.”

By this time, medical science was beginning to link poor sanitary practices with illness, a problem that rapidly increased as population centers became more densely crowded. Larger companies, like C&H, had constructed a sewage drainage system in 1893 that permitted the installation of toilets. When installing them, however, they were installed in the basements of houses rather than in converted closets. Still a toilet in the basement was an enormous improvement over a mad dash to an unheated outhouse in a February blizzard.

For women, running water with faucets also simplified the work of cleaning dishes and laundry. Prior to indoor water, washing clothes involved using water in a wood bucket with a washboard. The wife and mother, or maid in wealthier homes, who washed clothes often needed to carry water up to eight times from the nearest well, and devoted an entire day doing one weeks worth of laundry.

Another innovation that found its way into many Copper Country homes was the modern sewing machine. Prior to the 1850s, reported History of Things, sewing was the most time consuming part of “woman’s work”, in addition to child-rearing and general household management. Women hand-sewed bed sheets, pillow cases, table clothes, towels and clothing. A series of mechanical sewing machines had entered and exited the market before Isaac Singer patented and mass produced his brand in 1851.

At the time, Singer and Co. was best known for their treadle machine unit, the article reports. The arm, needle and plate were mounted on top of a table and powered underneath by a foot pedal (the treadle), the two components being connected by a leather belt. The table and treadle was obvious to anyone that entered the room and big enough to be considered a piece of furniture.

The Sears, Roebuck and Company mail order catalog for 1900 admitted without saying it, that sewing machines were a bit pricey.

“If you want to a buy a sewing machine and cannot afford to pay from $15.00 to $19.00 (according to the style of cabinet) for one of the best machines that money can buy … or cannot afford to pay even $12.35 … we will be pleased to accept your order of our Belmont machine at $9.84, or even our Homan machine at $48.45.” A major convenience of these machines is that they were treadle-powered, and so did not require electricity to operate.

While a sewing machine could be pricey, they were considered worth the investment, because they drastically reduced the amount of time sewing required. The ability to wash clothes inside also eliminated much time in running to the well for water, as well as eliminating the physical strain of carrying the weight of a bucket of water.

While residents of remote places like the Lake Superior copper region were not aware of it, mail order companies at the turn of the 20th century were revolutionizing retail sales and marketing.

As Smithsonian Magazine stated: “Mail-order firms like Sears were able to penetrate underserved rural areas by leaning on new infrastructure, such as the railroads that linked far-flung regions of the country.”

Sears dominated the rural retail market through its huge catalog, an amazing work of product advertising, consumer education, and corporate branding, the Smithsonian says. Titled the Book of Bargains and later, The Great Price Maker, the famous Sears catalog expanded in the 1890s from featuring watches and jewelry to including everything from buggies and bicycles to sporting goods and sewing machines. It educated millions of shoppers about mail-order procedures, such as shipping, cash payment, substitutions and returns. It used simple and informal language and a warm, welcoming tone. “We solicit honest criticism more than orders,” the 1908 catalog stated, emphasizing customer satisfaction above all else. Sears taught Americans how to shop.

Though mostly known for selling appliances, at one point Sears tapped into the real estate market, wrote Ellen Torres for the New York Daily News. From 1908 to 1940, Sears sold around 70,000 to 75,000 homes through their mail-order program. Customers could choose between different styles and would then be shipped the tools to build it.

The Quincy Mining Company utilized Sears’ homes. the annual report for 1900 stated that six “good dwelling houses built” at the Mesnard Division, 12 at North Quincy, 10 at Hillside addition in Hancock, and six at the stamp mill. The annual report for 1908 stated that during the year 1908, seven six-room houses were added at Mesnard and Pontiac locations. Those houses were constructed from standardized designs from Sears, Roebuck and Company, according to Erik Nordberg’s article “Company Houses Along the Picket Line: A Photographic Essay on the Michigan Copper Strike of 1913.”

Quincy, however, had nowhere near the respect for its workers that other mining companies did. Aside from the houses built for mine officers, the company did not run sewer lines to its houses, nor did it bother to provide water to its houses. So, while workers and their families at other company neighborhoods transitioned into the 20th century, at Quincy, residents were still forced to haul water from wells and use now primitive privies. But, Quincy also paid a price for its arrogance, in the form of high worker turnover and rents.

In her book, Hoagland reported that in a ten-year period between 1890-1900, the company lost nearly two-thirds of its tenants.

Still, it was the private sector — the home — that truly began to benefit by companies such as Sears, Roebuck and Company’s mail order catalogs, that made mass produced goods available at lower prices. As Nancy F. Koehn pointed out in her paper, An Essay from 19th Century U.S. Newspapers Database Consumerism and Consumption, points out:

“As the scale and scope of national distribution expanded, households relied less on the local retailer’s assessment of a particular product. Instead consumers came to know and trust goods by the way new brands were advertised.”

It would be next to, if not completely impossible, to quantify the products purchased by mail order by mining company households. But at the same time it could be asserted with a fair amount of certainty that many did. Companies such as Sears and Roebuck offered a wider selection of appliances, clothing, accessories and other goods that local stores would find themselves scrambling to make available to the increasing demands of consumers. The nation was in a period of great change; the Lake Superior copper region was right along with it.


Today’s breaking news and more in your inbox

Sun Apr 17 , 2022
Madison Ingram climbed on top of a chair, hoisting her group’s homemade hot air balloon as high as she could. The 16-year-old Bexley High School junior let go of the hot air balloon — made with six birthday candles, straws and a trash bag — and it gracefully swayed as […] 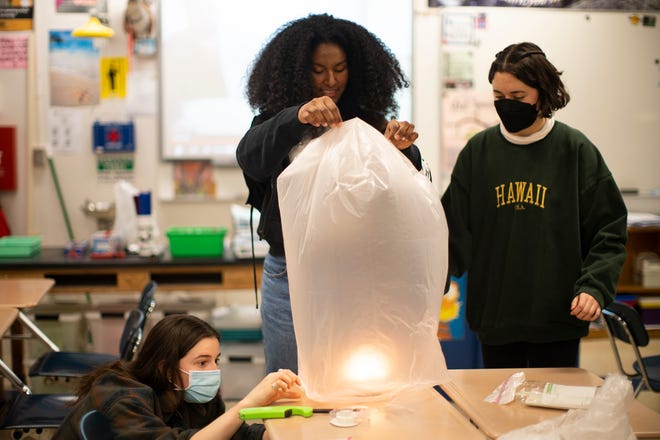