An all-female team of “hackers” was declared the winner on Thursday of the national technology contest – Florida Hacks with IBM – that called on participants to discover potential solutions to combat the effects of climate change. The team, Gator Gulf Energy – comprised of three current University of Florida […]

An all-female team of “hackers” was declared the winner on Thursday of the national technology contest – Florida Hacks with IBM – that called on participants to discover potential solutions to combat the effects of climate change.

The team, Gator Gulf Energy – comprised of three current University of Florida students and a recent graduate – will be awarded a $30,000 grand prize. As winners, the team will also earn access to UF’s HiPerGator AI, one of the fastest supercomputers in U.S. higher education, to work on a future project of their choosing.

“Out of all of the hackathon submissions, Gator Gulf Energy was one of a kind in that it used both complex mathematical modeling/analysis as well CAD designs that perfectly created a template for future analysis. This also makes the project easily adaptable for multiple future use cases to expand upon its positive impact on the environment,” said Gabriela de Queiroz, the Chief Data Scientist in AI Strategy & Innovation at IBM.

The more than 1,000 participants of the hackathon had 12 weeks to produce solutions while using IBM technologies, artificial intelligence, and machine learning. They had to choose from six “challenge statements” — from preserving Florida’s coastal ecosystems to addressing Florida’s energy consumption. The contest was open to students across the country, regardless of academic discipline.

In the end, 46 teams submitted a qualifying project by the Nov. 29 deadline. The projects went through two rounds of judging before the winning team, Gator Gulf Energy, was selected.

Stelzer said the team took interest in this hackathon because it was focused on sustainability issues and the potential societal impact their project could have. As the team discussed ideas, Lara – who had prior experience in renewable energy— proposed a project that would find a way to harness the power of the Gulf Stream.

The team then focused on how to make the project specific to the hackathon and the state of Florida.

“If we can hone in on a specific spot on our coastline and generate real data from it and really show people actual numbers and actual calculations of how implementing a system … would help reduce our carbon dioxide output and our carbon footprint and save energy … that’s how we can make this really impactful,” said Stelzer as she recalled the team’s discussions.

Ultimately, they settled on a project designed to tap into tidal energy. They conducted a study that called for the installation of 10 tidal turbines off the coast of Jacksonville and found that as many as 4,000 homes could be powered per year. Additionally, using the 10 turbines to power those homes could offset as much as 3,500 metric tons of carbon dioxide emissions per year.

The hackathon’s second place winners, Team Energy Eye, also focused on how to address energy consumption. According to their proposal, their project focused on “wasteful building power consumption” and presented a small sensor that measures light intensity, sound volume, and temperature, to read the environment of a room to help identify areas of inadequate energy consumption. As second place winners, Energy Eye will be awarded a $20,000 prize.

REcyeipts, the team that placed third, chose the “wildcard challenge statement,” which allowed participants to propose a project that addressed climate change but didn’t necessarily fit into the other statements.

According to their proposal, REcyeipts’ project proposed a phone application that allows users to use their grocery store receipts to learn of the equivalent carbon emissions of the product’s packaging if it were to be disposed of in a landfill; what can and cannot be recycled; and a list of waste facilities nearby area so users are able to divert their waste from landfills.

As third place winners, REcyeipts will receive a $15,000 prize. Additionally, both REcyeipts and Energy Eye will also earn access to HiPerGator AI to work on a future project of their choosing.

The participants of this hackathon had diverse backgrounds varying from computer science students to experienced developers, as well as environmental experts with little to no coding experience. Nearly half of the participants said they had never participated in a hackathon before, including Lara and Wu of Gator Gulf Energy.

At Thursday’s event, technology leaders from UF, IBM and the Florida Technology Council gathered for a round table discussion and to announce the winners. The panelists included UF Provost and Senior Vice President for Academic Affairs Joe Glover; Gabriela de Queiroz, chief data scientist of AI Strategy & Innovation at IBM; and James Taylor, CEO of the Florida Technology Council, an organization that focuses on the needs of the state’s technology sector.

In addition to IBM, UF partners with BeMyApp, a hackathon organizer for this event.

UF is making artificial intelligence the centerpiece of a major, long-term initiative that is combining world-class research infrastructure, cutting-edge research, and a transformational approach to curriculum. Learn more by visiting ai.ufl.edu. 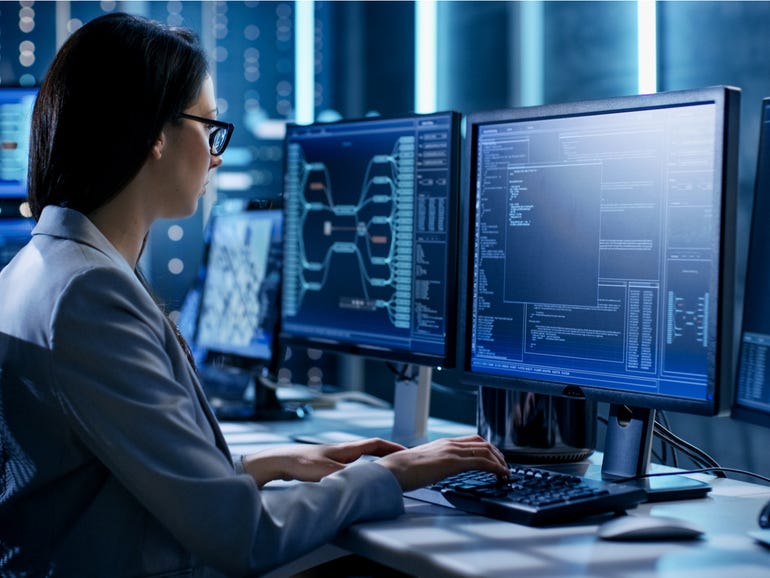