University of Central Florida researchers are helping develop the next generation of space technology and vehicles for missions back to themMoon and beyond. This range of technology includes advanced high-speed propulsion systems for interplanetary travel, lunar landing pads that self-assemble as a rocket descends, a helicopter-like rotorcraft lander that will […]

University of Central Florida researchers are helping develop the next generation of space technology and vehicles for missions back to themMoon and beyond.

This range of technology includes advanced high-speed propulsion systems for interplanetary travel, lunar landing pads that self-assemble as a rocket descends, a helicopter-like rotorcraft lander that will travel nearly a billion miles to fly across the surface of Saturn’s moon Titan and sails for solar-powered space travel.

The work reflects UCF’s role as a leader in producing the technology and workforce needed for the nation’s new space race.

The propulsion work, spearheaded by UCF Mechanical and Aerospace Engineering Associate Professor Kareem Ahmed, is creating new fuels and detonation-based propulsion to propel rockets at hypersonic speeds of Mach 5 and higher, or five times greater than the speed of sound.

For space missions, this advanced technology will allow spacecraft to travel farther and use less fuel, thus lightening their load.

The U.S. Department of Defense is investing heavily in the work with a new $1.5 million award to UCF to propel the technology, and UCF selected the team for a Jump Start award to upgrade its facilities.

“If the technology is successfully advanced, detonation-based hypersonic propulsion could be implemented into human atmospheric and space travel in the coming decades,” Ahmed says.

The work is important because without a landing pad, the jets from a rocket’s descent could blow damaging rocks and soil into nearby equipment or create a massive crater.

The research is through a subcontract with aviation and aerospace company Cislune through NASA’s Small Business Innovation Research program.

Key to the project is UCF’s provisionally patented invention that uses magnetic fields to sort lunar soil into layers. The process scoops up the soil then passes it through a separation process, known as beneficiation, sorting the grains particle-by-particle to keep those that are most absorptive of microwave energy. These soils are then laid back on the ground and melted by microwave energy into landing surfaces, a process known as microwave sintering.

Metzger, UCF postdoctoral researcher Dhaka Sapkota and a team of undergraduate students are currently quantifying how well the grains can be sorted into layers, and Metzger is preparing studies that model the economic, energy and development benefits of the technique compared to other methods.

“Already, microwave sintering appears to be the most economically practical method of building a landing pad on the Moon,” Metzger says. “We expect with the new technology it will win even more handily and will prove to be very affordable for NASA.”

The mission is expected to launch in 2027 and reach Titan by the mid-2030s. Scientists hope to understand more about the origin of life by studying Titan’s environment, which has similar chemicals to what scientists think Earth was like before life began.

The project is led by the Johns Hopkins Applied Physics Laboratory, and Kinzel’s team is focused on continuously improving the design of the craft’s main body, or fuselage, based on feedback from the team at Johns Hopkins.

They are doing this by performing advanced computer simulations of the gas flow Dragonfly will experience as it flies on Titan, which helps inform how the vehicle is designed. This includes using UCF’s Stokes high performance computing cluster, with help from UCF’s Advanced Research Computing Center Director Glenn Martin, to define the aerodynamic character of the fuselage at all of the flight conditions it will experience.

“It is very much an iterative process of defining the aerodynamic design, then reassessing structural and thermal loads, along with getting new features from the scientists,” Kinzel says. “They tell us something doesn’t work or meet design criteria, or we need a new sensor, and we reiterate and continually refine and improve the design.”

The preliminary design review is expected to be submitted to NASA this summer.

Mechanical and Aerospace Engineering Assistant Professor Kawai Kwok is leading research to model the performance of ultrathin composites that can be used to build solar sails and other large deployable structures for spacecraft.

Almost like measuring tape, thin-ply composite deployable structures can be rolled up, compacted and stored for long periods until they are needed to be deployed. This makes them perfect for space missions where smaller sizes and weights mean more efficient travel.

The new simulation capability is able to predict the shape distortions of long composite booms in space, which is a prerequisite to qualify structures for flight, Kwok says.

“Our collaborators at NASA are making use of our analyses to inform their ground tests of the composite deployable booms, in preparation for the Advanced Composite Solar Sail System, or ACS3, mission that’s expected to launch this year,” Kwok says.

The researcher says the team is currently moving onto the next phase of the project where they will explore manufacturing large structures directly in space using high-temperature thermoplastic composite materials.

The technology highlighted here is a snapshot of the broad range of space-related tech projects at UCF, including more than a dozen aimed at returning the U.S. to the moon, with more projects anticipated as the push to explore space and harness its resources continues.

Ahmed joined UCF’s Department of Mechanical and Aerospace Engineering, part of UCF’s College of Engineering and Computer Science, in 2014. He is also a faculty member of the Center for Advanced Turbomachinery and Energy Research and the Florida Center for Advanced Aero-Propulsion. He served more than three years as a senior aero/thermo engineer at Pratt & Whitney military engines working on advanced engine programs and technologies. He also served as a faculty member at Old Dominion University and Florida State University. At UCF, he is leading research in propulsion and energy with applications for power generation and gas-turbine engines, propulsion-jet engines, hypersonics and fire safety, as well as research related to supernova science and COVID-19 transmission control. He earned his doctoral degree in mechanical engineering from the State University of New York at Buffalo. He is an American Institute of Aeronautics and Astronautics associate fellow and a U.S. Air Force Research Laboratory and Office of Naval Research faculty fellow.

Metzger received his bachelor’s degree in electrical engineering from Auburn University and his master’s and doctorate in physics from UCF. Before joining UCF in 2014, he worked at NASA’s Kennedy Space Center for nearly 30 years.

Kinzel received his doctorate in aerospace engineering from Pennsylvania State University and joined UCF’s Department of Mechanical and Aerospace engineering, a part of UCF’s College of Engineering and Computer Science, in 2018. He is also a member of UCF’s Center for Advanced Turbomachinery and Energy Research.

Kwok received his doctorate in aerospace engineering from the California Institute of Technology. He joined UCF’s Department of Mechanical and Aerospace Engineering, part of UCF’s College of Engineering and Computer Science, in 2017.

Tue Jan 25 , 2022
Professors Shlomo Zilberstein and Deepak Ganesan of the Manning College of Information and Computer Sciences (CICS) at the University of Massachusetts Amherst, have been named Fellows by the Association for Computing Machinery (ACM), the world’s largest educational and scientific computing society. The ACM Fellow recognition is the organization’s highest member […] 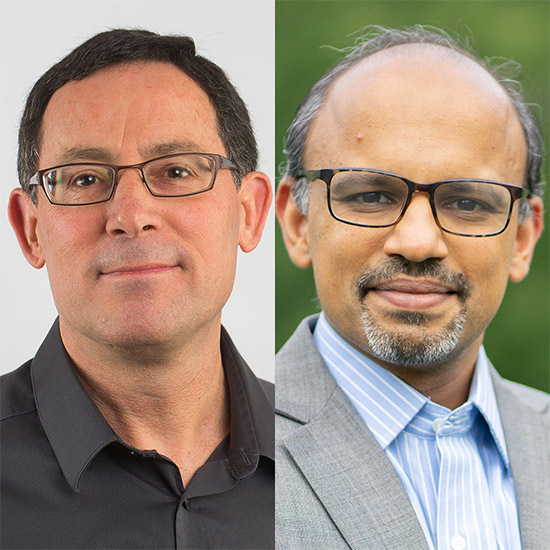