Editor’s note: This story has been updated with comments from Pedro Domingos and additional information.

The University of Washington’s Paul G. Allen School of Computer Science repudiated a tweet by one of its emeritus faculty members who claimed that “half of the female STEM faculty in the U.S. were hired over more qualified men.”

The Jan. 1 tweet came from Pedro Domingos, who joined the UW faculty in 1999 and gained the “emeritus” title after retiring in 2020. He is the author of The Master Algorithm, recommended reading by Bill Gates and also bookshelf background in Chinese president Xi Jinping’s 2018 annual address. He has almost 50,000 Twitter followers.

Domingos was similarly denounced by the UW last winter for comments he made online in a debate about AI ethics.

His latest tweet was also condemned by the editor of Science magazine Holden Thorp; university researchers nationwide; and by industry professionals, including Jeff Dean, Google’s senior vice president for research and health and Allen School alumnus.

“Former faculty member Pedro Domingos unfortunately used the holiday weekend to yet again tweet meritless, sexist, inflammatory, attention-seeking commentary that reflects poorly on him and everyone associated with him. We, once again, repudiate his views,” said the Allen School in a statement Monday.

A 2010 report from the National Academies of Sciences, Engineering and Medicine provides key support for his views, said Domingos in an interview with GeekWire on Tuesday. The study examined faculty hiring in several STEM fields from 1999 to 2003, and showed that the percentage of women increased at key steps of the hiring process, with the exception of tenured biology jobs.

But the report also noted that fewer women Ph.D. graduates than men entered the academic job market, highlighting the “leaky pipeline” of women dropping out on the route to tenured jobs.

“It’s important to note that these higher rates do not imply favoritism, but may be explained by the possibility that only the strongest female candidates applied,” said the report’s authors. “This self-selection by female candidates would be consistent with the lower rates of application by women to these positions.”

A majority of fellow researchers on Twitter were critical of Domingos’ tweets.

Domingos told GeekWire that “there are tons of people who will agree with me privately but are afraid to speak up.”

He also described the computer science school’s statements as “cowardice” and wished that it would instead promote “academic freedom” even amid disagreement with faculty viewpoints.

Jennifer Golbeck, a professor in the College of Information Studies at the University of Maryland College Park, criticized Domingos in a series of tweets and said he lacks data to support his view.

“In terms of data to back his claim up, there really isn’t any,” Goldbeck told GeekWire. “None of the evidence Pedro presents supports his point and, in fact, most of it contradicts him.”

Golbeck noted that Domingos did not provide evidence for another statement: “Affirmative action means women get hired over men even when they’re less qualified.”

Said Golbeck: “There is no affirmative action or quotas at my university or any other I know of (and I know a lot). He of course provides no source for his claim,” she said.

Ed Lazowska, a longtime UW computer science professor and former chair of the computer science department, also rejected Domingos’ claim, noting that the UW is bound by a state anti-affirmative action initiative. “The women we admit to our degree programs, and women we hire to our faculty, are every bit as qualified as the men,” he said. “It’s the law.”

Lazowska added: “Diversity is essential to the quality of any organization and the quality of its output — diversity of backgrounds, of experiences, of strengths, of perspectives.”

Domingos said that despite the Washington state law, biased preference for women candidates at the University of Washington and other institutions occurs. “Everyone knows that this is going on and it’s getting worse and worse,” he said.

Domingos also said “there’s absolutely no reason why there should be as many women in tech as men.” He added that diversity of viewpoints, backgrounds, personalities and ideas is valuable, but “not of gender, not of race.”

His tweets this week brought renewed attention to the gender gap in STEM careers and barriers women face.

A 2018 report by the National Academies in 2018 examined sexual harassment and demeaning behavior in STEM, such as implications that women do not belong in science. “Sexist hostility,” such as comments that women were not smart enough to succeed as scientists, was reported by 25% of female engineering students and half of female medical students in one university system.

While women have seen gains in education and employment in most STEM fields over the last few decades, the proportion of computer science bachelor degrees awarded to women declined after 2000. That’s only begun to rise in the last few years. Nineteen percent of bachelor’s degrees in computer science were awarded to women in the U.S. 2017-2018, and 23% of doctorates, according to a recent Pew Research Center report.

Lazowska pointed to a range of efforts by the Allen School to be welcoming to women and increase student and faculty diversity.

The Allen School, for instance, belongs to the Building Recruiting and Inclusion for Diversity (BRAID) Program, an initiative to increase the diversity of undergraduate computing programs. That initiative is led by Harvey Mudd College, once a heavily male-dominated undergraduate tech school. Half of its graduates are now women.

The initiative aims to increase diversity using measures such as outreach programs to high schools and building community among under-represented students.

The Allen School now awards 29% of its computer science and bachelor’s and doctorate degrees to women, higher than national averages. In the past six years, the Allen School has grown by 28 faculty members, half of whom have been women.

The school won an award in 2015 from the National Center for Women & Information Technology for supporting women undergraduates.

“We do this through outreach, through recruiting, through creating a welcoming and inclusive environment, through a variety of programs that make people feel that they belong,” said Lazowska. “So although Domingos is an outlier whose statements we categorically reject, these statements are tremendously damaging because they inevitably reflect on us, even though they do not represent the environment in the Allen School.”

Psychologists at Cornell University, referenced in a tweet by Domingos as additional resources, published a commentary and conducted studies on faculty rankings of mock applicants to STEM faculty jobs. One of their studies suggested that women are favored over identically-qualified men, though some questioned the real-world relevance, and other research has come to different conclusions.

Another Cornell study with the same methodology explored deeper, refuting the notion of under-qualified women gaining the upper hand in hiring. “Faculty of both genders and in all fields preferred the more-qualified men over the slightly-less-qualified women, and they also preferred the stronger women over the slightly-less-qualified man,” concluded the researchers. “These data give no support to the twin claims that weaker males are chosen over stronger females or weaker females are hired over stronger males.”

The barriers to women’s full participation in STEM are complex. In 2019, science leaders discussed ways to increase gender diversity in the STEM research workforce in a commentary in Science magazine. They pointed to studies showing that male postdocs receive higher salaries, and that male faculty members report larger salaries and startup packages. Systemic barriers to women’s advancement include unconscious bias, social and cultural factors such domestic labor burdens, and sexual and gender-based harassment, they concluded.

Views that women have less ability for STEM careers are not uncommon. Google in 2017 fired engineer James Damore for attributing gender disparities in tech largely to biology, in an internal memo. Several other employees agreed with him, according to a report.

Domingos said Tuesday that it was a “terrible” idea for Google to fire Damore, who was “actually telling the truth.”

Stuart Reges, a principal lecturer at the Allen School, in 2018 wrote a controversial essay with a mix of messages about gender disparity in computer science, saying that “women can code, but they often don’t want to” because of cultural reasons.

Domingos lamented the expense of diversity officers and outreach initiatives. He asked: “What about attention to the constant, continuous discrimination against men?”

“There are men suffering at every stage of the pipeline,” he said. Domingos referenced a book by Christina Hoff Sommers, The War Against Boys: How Misguided Policies Are Harming Our Young Men, which argues that boys are falling behind socially and academically.

According to the Science magazine commentary, many institutions have instituted policies to improve mentorship and support faculty diversity, for instance adding an extra year on the tenure clock for new parents.

More work remains to make STEM a welcoming and fair place for women, said the authors. Among other measures, they suggested that institutions track metrics for quality of mentorship, as well as institutional service, a burden often born disproportionately by women.

Golbeck said that as a woman in computer science, she has “put up with this kind of criticism my entire academic career.”

“It’s profoundly damaging to work so hard and then be told over and over that you have not earned your achievements and to know that many people think you don’t deserve to be there,” she said. “It has been a constant battle for me and, frankly, most women I know in computing. Impostor syndrome is not just a personal thing but the result of this kind of behavior from men in the field.”

Tue Jan 11 , 2022
Computer networks allow organizations to connect with employees, clients, customers, and suppliers. The more organizations rely on these advancing and expanding technologies, the more problematic network threats and challenges become. A network security master’s degree positions graduates to provide valuable support to organizations in this ongoing battle.  The Bureau of […] 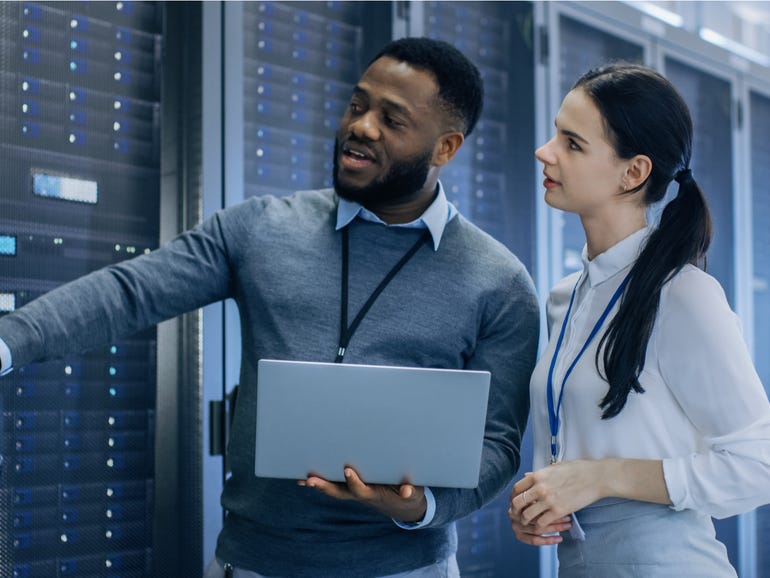